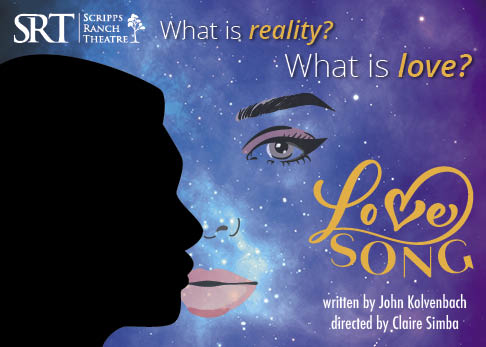 “Love Song” is an offbeat story about love – real or imagined – and its effects on people. It plays through March 20 at Scripps Ranch Theatre.

Playwright John Kolvenbach posits a quartet: a married couple named Joan and Harry, Joan’s manic depressive brother Beane, and Molly, who meets Beane when she breaks into his apartment – or may not even exist.

Sound strange? It is, and it’s also amusing and fascinating. The story plays out on Alyssa Kane’s do-it-yourself set, which includes several movable pieces used by the cast to indicate time and locale shifts. The quirkiness of the play is heightened by interesting lighting and sound designs by Jared Jacobs and Robert May, respectively. And Bernice Brosious’ costumes add to the atmosphere.

Joan has taken it upon herself to keep tabs on Beane, who lives in a tiny apartment with only a dilapidated sofa and a spoon.

Joan and Harry think Beane needs to talk to a psychiatrist, and she tasks Harry with getting answers to a psychological survey from Beane (Paul Eddy), but Beane questions the wording rather than the meaning of the questions too much for Harry to make any headway.

Things get really strange when Beane’s apartment is burgled by a woman named Molly (Claire Kaplan), who is disappointed that he has nothing worth stealing, but she does seem to rather like Beane (Paul Eddy). And he instantly falls in love.

And when Beane announces to the world “I think I met someone” (meaning Molly), his depression suddenly lifts and he seems almost normal. At least until we begin to suspect that Molly is imaginary.

Along the way, Joan and Harry decide that their relationship has fallen into a bit of a rut and it’s time to spice it up a bit by making out on the couch, which turns out to be so much fun that they plan to continue it to the extent to playing hooky from their jobs.

The secret to this play is in the catch phrase of the play: “Death to literalism!” And not much that you hear is literally true. But the whole idea of truth vs. imagination may spark interesting conversation on the way home. And those steamy verbal scenes are great fun to listen to.